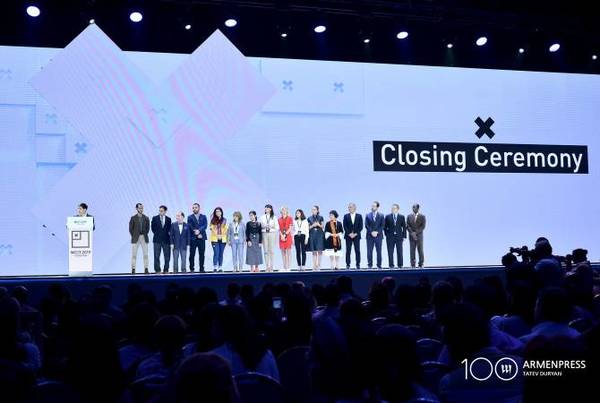 The World Congress on Information Technologies (WCIT-2019) taking place in Yerevan is over. ARMENPRESS reports the end of the congress was announced at Karen Demirchyan Sports and Concert Complex on October 9.

In his closing speech Secretary General of World Information Technology and Services Alliance (WITSA) Jim Poisant thanked all the organizers. ‘’Before starting the closing ceremony I want to say that you were great. We will return home after all this, but what happened during these days will remain in our hearts forever’’, Poisant said.

Chairman of the organizing committee of WCIT 2019 Alexander Yesayan thanked the Government of Armenia, Deputy PM Tigran Avinyan, the technological community of Armenia and the volunteers helping to carry out the event.

The concert of WCIT 2019 opening ceremony took place on October 6 at the Republican Square of Yerevan. The official works of the congress kicked off on October 7 at Karen Demirchyan Sports and Concert Complex, during which Prime Minister of Armenia Nikol Pashinyan and prominent Dia...

WCIT 2019 kicks off in Yerevan

Organizers negotiating with Obama for participation in WCIT 2019 in Yerevan

Organizers negotiate with Obama for potential WCIT 2019 appearance in Yerevan