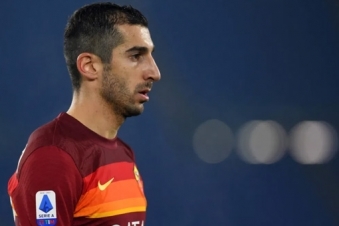 PanARMENIAN.Net - Roma attacker Henrikh Mkhitaryan will reportedly have his contract with Roma extended for one more year until 2022, Roma Press cited Filippo Biafora of Il Tempo as saying on Friday, December 25.

Mkhitaryan has been one of the standouts during the first half of the Serie A campaign. The Armenian has 7 goals and 6 assists in fourteen appearances so far after he completed a free transfer to the Giallorossi in the summer.

The attacker, who also spent last season at Roma but on loan, terminated his contract with Arsenal and rejoined Paulo Fonseca’s side for zero thanks to the work of his agent, Mino Raiola.

While his deal with Roma technically expires this June, Biafora ...

Henrikh Mkhitaryan back in training

Google partners up with Pentagon for drone AI project

Google partners up with Pentagon for drone AI project

Henrikh Mkhitaryan is in symbolic team of top winter transfers

Henrikh Mkhitaryan is in symbolic team of top winter transfers