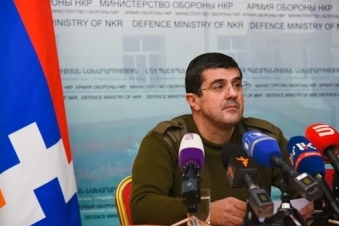 PanARMENIAN.Net - Nagorno-Karabakh (Artsakh) President Arayik Harutyunyan has urged Russian President Vladimir Putin to do everything possible to help end hostilities and resume political processes in the zone of the Azerbaijani-Karabakh conflict.

In a message he wrote on Friday, October 23, Harutyunyan said Russia is perceived in the historical memory of the people of Artsakh as a fraternal country that has always extended a helping hand to the Armenian people.

"For more than a century (from early 19th to beginning of the 20th century), Karabakh was part of the Russian Empire. For Karabakh, this historical period was marked by a long period of peace, creation, repatriation of compatriots, and economic recovery. The cultural life particularly developed. Since the second half of the 19th century, the administrative and political center of Artsakh, the city of Shushi, has been one of the most important cultural and economic centers of the entire Transcaucasia," Harutyunyan said.

"In the same period, a whole galaxy of Karabakh Armenians played an important role in the military-political and social life of Russia, among them Valerian Madatov, Ivan Lazarev, Lazar Serebryakov, Mikhail Loris-Melikov, Vasili Bebutov."

Today too Artsakh and Russia enjoy close relations, Harutyunyan said: "A significant part of the representatives of the three million Armenian diaspora in Russia are natives of Artsakh, many of them forcibly deported as a result of the policy of genocide and ethnic cleansing carried out by the Azerbaijani authorities in the ...

U.S.: Humanitarian crisis "on the way" in Karabakh