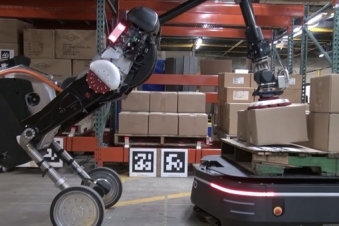 PanARMENIAN.Net - Boston Dynamics and OTTO Motors have teamed up for a demonstration of the warehouse of the future. In a newly released video, a Boston Dynamics Handle robot rushes about a storage area at speed as it picks boxes and builds pallets atop an OTTO Autonomous Mobile Robot (AMR) platform, New Atlas reports.

Looking like a robotic version of some huge, prehistoric, flightless, meat-eating bird, Handle is alarming the first time you see it in action, but there is a method to this mechanical madness. Revealed by Boston Dynamics in 2019 as the prototype for a new generation of warehouse robots, the agile machine can autonomously pick boxes and load and unload them on pallets and trucks. In operation, Handle's robotic arm can reach up to 3 m (10 ft) and lift 15 kg (33 lb). It can roll about at about 7 mph (11 km/h) and it can pick up boxes at a rate of 360 per hour.

Handle has recently been upgraded with the company's Pick computer vision system and software. According to Boston Dynamics, Pick provides Handle with 2D and 3D vision, allowing the robot to accurately locate and identify boxes in a real-world warehouse environment. The vision system can also send commands to Handle, telling it how to or...

When physics meets robotics: an interview with scientist and inventor, Tigran Shahverdyan