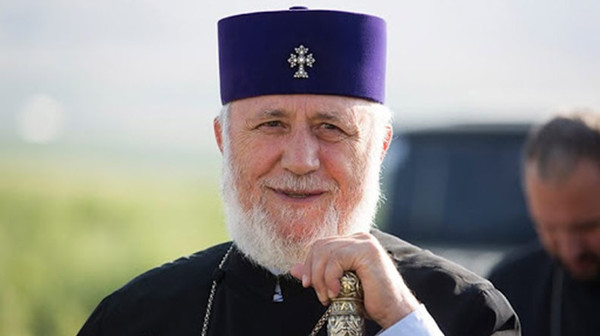 Several Azeri websites claimed that Armenians in Azerbaijan sent last October, in the midst of the Artsakh War, an appeal to “Catholicos Karekin II, Armenians of the world, and Armenians in Karabagh.”

One of the Azeri websites (Report News Agency) alleged that the “appeal was signed by a group of tens of thousands of Armenians” in Azerbaijan. Just from this one sentence alone, one can tell that this information is a complete lie as there are no “tens of thousands of Armenians” in Baku. After the brutal massacres of Armenians in Sumgait and Baku and elsewhere in Azerbaijan in 1988 and 1990 by Azeri mobs, almost all Armenians fled that country to save their lives. The few Armenians remaining in Azerbaijan are those who were married to Azeris. Living in constant fear, they use Azeri names to disguise their true identities.

I made two attempts to verify if this letter was authentic or fake. First, I checked with one of the Azeri websites that had referenced the letter. I asked for a photocopy of the letter. I wanted to see how many signers there were and their names. The Azeri website, most probably funded by the Azeri government, responded that they are unable “to conduct painstaking investigation!” The only place where the entire text of the fake letter appeared was in an Azeri website (Armenia.az) that regularly posts hundreds of anti-Armenian articles in Armenian and Russian. These articles are written by Azeris who formerly lived in Armenia and know fluent Armenian.

My next attempt to verify the letter was with the Information Department of the Mother See of Holy Etchmiadzin in Armenia, the alleged recipient. The Catholicosate was not aware of receiving such a letter and stated that it was most probably an example of Baku’s routine fabrication.

For the amusement of the readers here are excerpts from the English translation of the fake Armenian letter posted on October 9, 2020 on the Azeri website, Armenia.az.

The alleged Armenian letter-writers appealed to Catholicos Karekin II to use his “authority and power… to end Armenia’s policy of occupation against Azerbaijan, return the occupied Azerbaijani lands to their owners, and help prevent unjust bloodshed.” No true Armenian would make such a statement, unless his or her life was threatened.

The letter then appealed “to Armenians of the world and various Armenian lobbies so people can live in peace,” claiming that an Armenian woman by the name of Karina Grigoryan in Ganja, Azerbaijan (Gandzak in Armenian), was seriously injured during the Armenian shelling. It is highly unlikely that such an Armenian woman lives in Gandzak. One thing is certain; no Armenian in Azerbaijan would be carrying such an obvious Armenian name. Those with Armenian names who lived in Azerbaijan were either killed or fled the country over 30 years ago.

The letter went on to claim that Azerbaijan “conducts anti-terrorist operations only in its territories, wishing to liberate its hist...