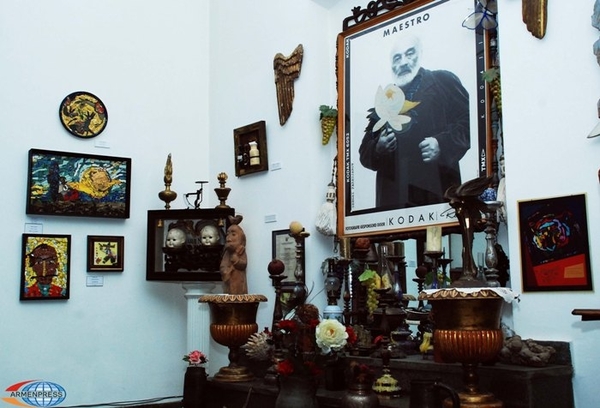 One of the most radiant representatives of the 20th century cinema Sergei Parajanov would celebrate his 90th birthday anniversary on January 9. This is a good occasion for the outstanding filmmaker’s friends and fans to come together over Parajanov’s art. In a conversation with “Armenpress” the Director of Sergei Parajanov’s Museum Zaven Sargsyan stated that each year they pay a visit the prominent filmmaker’s grave in Komitas Pantheon and this year will not be exception as well. “We’ll organize a reception in the Museum on the occasion of the jubilee as soon as we return from the pantheon,” Zaven Sargsyan underscored.

Among other things the Director of Sergei Parajanov’s Museum Zaven Sargsyan noted that the filmmaker’s 90th anniversary will be marked within the framework of “Golden Apricot” International Film Festival on July 13-20, which will be dedicated to Sergei Parajanov.

Sergei Parajanov was born on January 9, 1924. He was Soviet Armenian film director and artist who made significant contributions to the Ukrainian, Armenian and Georgian cinema. He invented his own cinematic style, which was totally out of step with the guiding principles of socialist realism (the only sanctioned art style in the USSR). This, combined with his controversial lifestyle and behaviour, led Soviet authorities to repeatedly persecute and imprison him, and suppress his films.

Although he started professional film-making in 1954, Parajanov later disowned all the films he made before 1964 as "garbage". After directing Shadows of Forgotten Ancestors (renamed Wild Horses of Fire for most foreign distributions) Parajanov became something of an international celebrity and simultaneously a target of attacks from the system. Nearly all of his film projects and plans from 1965 to 1973 were banned, scrapped or closed by the Soviet film administrations, both local (in Kyiv and Yerevan) and federal (Goskino), almost without discussion, until he was finally arrested in late 1973. He was imprisoned until 1977, despite a plethora of pleas for pardon from various artists. Even after his release (he was arrested for the third and last time in 1982) he was a persona non grata in Soviet cinema. It was not until the mid-1980s, when the political climate started to relax, that he could resume directing. Still, it required the help of influential Georgian actor Dodo Abashidze and other friends to have his last feature films gre...

PM: Russian-Armenian cooperation in the field of defense promotes stability and security in the region

Markedonov: Armenia leaders should learn how to combine language of revolution and pragmatism