Yelk parliament faction: No possibility of counterrevolution in Armenia

Yelk parliament faction: No possibility of counterrevolution in Armenia 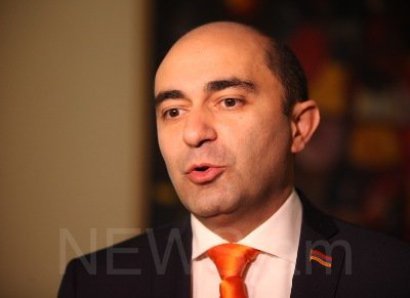 YEREVAN. – Yesterday we were in the office of National Assembly (NA) President Ara Babloyan for several hours, and there we discussed the situation—in a very quiet, very calm, friendly, and warm atmosphere.

Edmon Marukyan, a member of the NA “Way Out” (Yelk) Faction, on Wednesday told the aforesaid to reporters in parliament.

In his words, during this talk Prime Minister Nikol Pashinyan noted that he plans to resign in several days, after 14 days of which the NA shall not elect a new PM, whereupon the parliament shall be dissolved, and a snap NA election shall be conducted in Armenia in December.

As per Marukyan, the other parliamentary forces, in turn, noted that even though they are for a snap election, they want it to be held in May 2019.

“There was no consensus,” the MP added. “But there is an arrangement that the [respective] contacts continue.”

In the Yelk faction MP’s words, it seems to him that there is no room for concessions, and therefore the election will take place in December.

Also, Edmon Marukyan expressed the confidence that there is no possibility of a counterrevolution in Armenia, and there is no likelihood of nominating another candidate—but incumbent Pashinyan—for P...

MP: Issue of Armenia's membership in EAEU should not be politicized

ARF on talk with Armenia opposition movement leader MP: No major differences in our approaches (VIDEO)