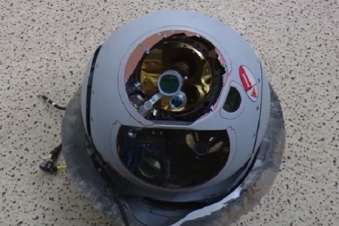 PanARMENIAN.Net - The Defense Army of Nagorno-Karabakh (Artsakh) has published footage of the wreckage of a Turkish Bayraktar TB2 drone, which belonged to the Azerbaijani Armed Forces and was shot down by the Armenian troops in the conflict zone.

The video features a Canada-produced Wescam CMX 15D Gimbal Turret, as well as a power and communication cable with a Turkish-language inscription.

After the first reports emerged of Turkish drones being used to target civilian populations in Karabakh, Canada halted military export permits to Turkey.

The power and communication cable

Opinion: Biden should sanction perpetrators of war crimes against Armenians