Armenia legislature has quorum at last

Armenia legislature has quorum at last 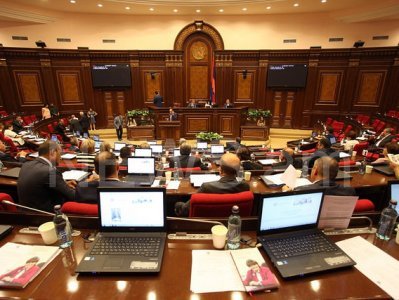 There was quorum at the National Assembly of Armenia, two hours later on Wednesday, and the parliament is voting on the bills that were debated on yesterday.

All six matters on the NA session’s agenda were discussed on Tuesday.

As reported earlier, the parliament failed to start its session on Wednesday ...

Armenia PM: Government has set record at last meeting of 2017

Resolution on Artsakh's right to self-determination to be introduced to U.S. Ohio legislature

RPA to not boycott and attend NA session (video)

U.S. Senator to convene committee hearing on Armenia and Artsakh

Armenia parliament session not starting for lack of quorum