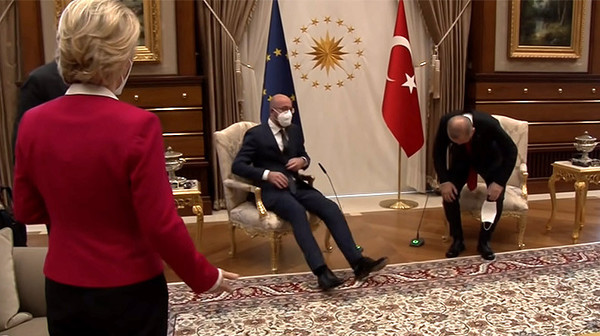 Turkish President Recep Tayyip Erdogan met Tuesday with the European Union’s two presidents, but an awkward moment when the woman among them was left standing caused a bit of a diplomatic stir, The Washington Post reported.

A video of the leaders assembled in an ornate meeting room in Ankara showed Erdogan and European Council President Charles Michel settling themselves into gilded chairs, while European Commission President Ursula von der Leyen appeared unsure of where she was expected to sit.

Von der Leyen stood staring at them, gestured with her right hand and appeared to say “um” or “ehm.”

She was ultimately offered a beige couch about 12 feet away, opposite Turkish Foreign Minister Mevlut Cavusoglu, who occupies a lower-status rank in typical diplomatic protocol.

A member of the European Parliament, Dutch lawmaker Sophie in ‘t Veld, noted that at meetings between Erdogan and the prior pair of E.U. presidents, who were both men, the three leaders...

EU threatens to impose sanctions against Turkey over Cyprus drilling