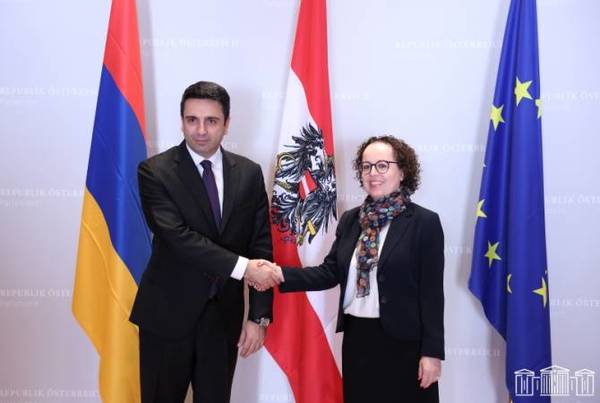 As ARMENPRESS was informed from the National Assembly of Armenia, in a conversation with his colleague, the President of the National Assembly of Armenia noted that in recent years a positive dynamic of the development of bilateral relations has been observed in the political platform between Armenia and Austria: active reciprocal visits, meetings at the level of presidents, prime ministers, foreign ministers have taken place.

He added that it is necessary to establish cooperation between the Armenian parliament and the upper house of the Austrian parliament, as parliamentary diplomacy plays a significant role in the Armenian-Austrian bilateral agenda at both the federal and decentralized levels.

Alen Simonyan reaffirmed Armenia's commitment, together with its European partners, to expand and deepen the process of institutional reform aimed at further strengthening democracy, human rights and the rule of law. In this sense, according to Alen Simonyan, the entry into force of the Armenia-EU Comprehensive and Enhanced Partnership Agreement is a turning point, which will open new perspectives for the deepening of Armenia-EU cooperation.

Issues related to Armenia-EU visa liberalization, opening of the Austrian Embassy in Armenia, opening of Austrian visa services in Yerevan were discussed during the conversation.

Being president is a job and a mission at the same time: President Sarkissian’s interview to Society Magazine

Pashinyan meets with Ambassadors, emphasizes recognition of NK people’s right to self- determination

Armenian PM, Russian President sum up the results of the meeting with a joint statement