Turkey withdraws from base in Syria's northwest

Turkey withdraws from base in Syria's northwest 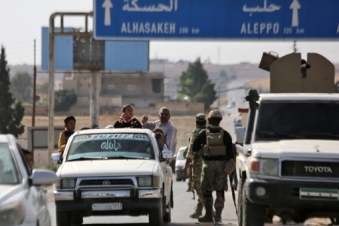 PanARMENIAN.Net - Turkey is withdrawing troops from a military post in northwest Syria that was surrounded by Syrian government forces last year, but is consolidating its presence elsewhere in the region, sources familiar with the operation said on Monday, October 19, according to the Middle East Monitor.

The observation post at Morek was one of a dozen set up by Turkish soldiers in 2018 under an ill-fated deal to calm fighting between Syrian government troops and Turkey-backed rebels controlling the northwestern Idlib region.

Morek and several other Turkish posts were surrounded last year by advancing Syrian government forces. Ankara has kept them manned and re-supplied since then while reinforcing the remaining rebel-held territory to hold back government forces and prevent millions of refuge...

More than 100 killed in Syria air raids in past 10 days, UN says

Erdogan: Turkey will not leave Syria until an election is held

Airstrikes in Syria kill at least 20 near school, markets