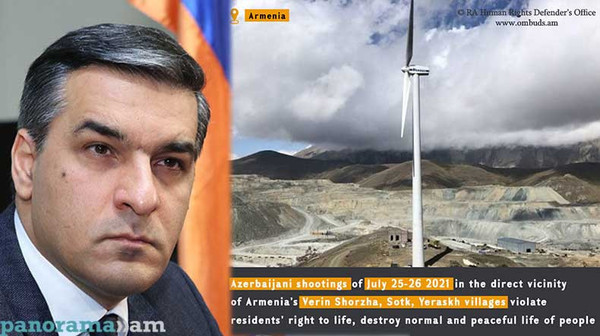 Since early this morning, the ombudsman’s office has received alarming calls from the civilian residents that the Azerbaijani armed forces are firing shots on Sotk village of the Geghamasar community in Gegharkunik Province.

It was revealed that the shots were fired from the positions of the Azerbaijani armed forces located in the area of the windmills of Sotk mountain pass in Geghamasar. The shootings occurred over a long period of time with interruptions.

Alarming calls were also received that the employees of the Sotk mine had been evacuated due to the shootings of the Azerbaijani armed forces and the tense situation provoked by them.

The fact that GeoProMining Gold was forced to stop the mining overnight due to the shootings demonstrates that the Azerbaijani armed forces obstruct the company’s legal business activity, grossly violate the rights of employees, and pose a real threat to human life.

The human rights defender specifically states that the area of the windmills, from which the Azerbaijani armed forces shot, was provided to a company legally registered in Armenia, by the decision of the Armenian government in 2000, based on the law “On State Border”. A 30-year lease agreement was signed with that company, ensuring the state registration of property rights. Namely, the land is the legal possession of a company registered in Armenia, and was provided for the construction of a wind power plant for the purpose of electricity production.

‘Armenian Armed Forces protect the rights, life and peace of our residents’ - Ombudsman