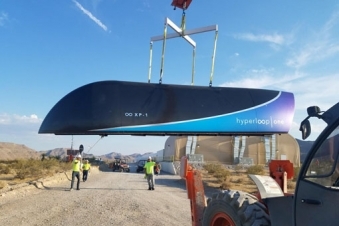 PanARMENIAN.Net - With a modified Tesla Model X zipping through a Boring Company tunnel Tuesday, December 18 night, Elon Musk took the wraps off his vision of a high-speed tunnel system he believes could ease congestion and revolutionize how millions of commuters get around cities, CNBC reports.

“I thought it was epic,” said Musk as he described how he felt being whisked through the Boring Co.‘s demonstration tunnel. “For me it was an epiphany, like ‘this thing damn well worked.’”

Musk, who founded the Boring Co. two years ago after complaining that traffic in Los Angeles was driving him “nuts,” says the demonstration tunnel cost approximately $10 million to complete. Engineers and workers have been boring the 1.14-mile-long tunnel underneath one of the main streets in Hawthorne, California. One end of the tunnel starts in a parking lot owned by Musk’s Space X. The other end of the demonstration tunnel is in a neighborhood about a mile away in Hawthorne.

During his Tuesday evening presentation, Musk described the Boring Co.’s tunnels as “an actual solution to the soul-crushing burden of traffic,” laying out the ways they could be integrated into cities to one day make transportation faster and easier.