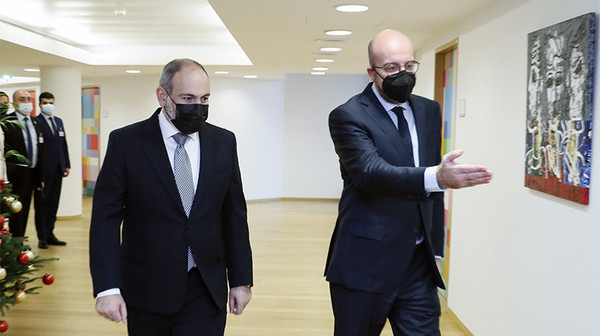 Nikol Pashinyan, who is in Brussels on a working visit, on Tuesday held a private conversation with President of the European Council Charles Michel, his office reported.

The prime minister of Armenia thanked Charles Michel for the consistent efforts aimed at solving the problems caused by the 44-day war.

The interlocutors referred to the upcoming trilateral meeting between Prime Minister of Armenia Nikol Pashinyan, President of the European Council Charles Michel and Azerbaijani President Ilham Aliyev scheduled for today, attaching importance to the continuity and strengthening of the dialogue. The parties expressed hope for effective negotiations, which will contribute to stability and a comprehensive settlement of the issues.

Nikol Pashinyan and Charles Michel also touched upon the agenda and issues for discussion at the sixth summit of the Eastern Partnership to be held in Brussels on December 15. The parties highlighted the development of Armenia-EU cooperation and the ef...

Pashinyan stresses need for addressed reaction of intl. community to situation in Artsakh in a meeting with EU's Michel

If Azeri MPs are sincere, they should resolve this issue immediately – Euronest PA Co-Chair on Armenian POWs