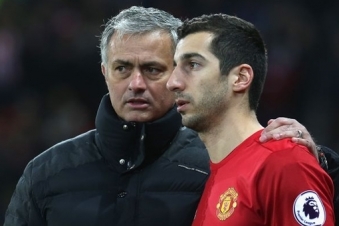 PanARMENIAN.Net - Armenian midfielder Henrikh Mkhitaryan, who formerly played at Manchester United, has said that manager Jose Mourinho "doesn't care if we play bad football" after reuniting at Roma, as he revealed their issues at Old Trafford are a thing of the past.

Mkhitaryan spent 18 months under Mourinho at United between 2016 and 2018 before leaving for Arsenal in a swap deal for Alexis Sanchez after falling out of favour with the Portuguese boss. After struggling at Arsenal, the Armenian moved to Serie A with Roma where he has spent the last season-and-a-half and has now been joined by Mourinho after he was sacked by Tottenham in April.

With the two reunited in Rome during pre-season, Mkhitaryan has revealed to Sky Italia (via Manchester Evening News) what it's like to play under the former Chelsea, Real Madrid and Inter Milan boss.

"Mourinho is very ambitious, he always wants to win. He doesn’t care if we ...

Manchester Evening News: Henrikh Mkhitaryan can use one team-mate's example to save career