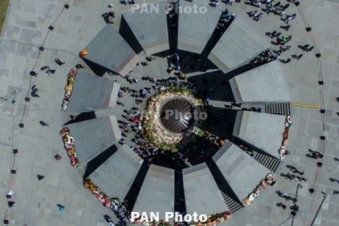 PanARMENIAN.Net - After the United States House of Representatives recognized the Armenian Genocide on Octber 29, the boldest and wisest course for Turkish President Recep Tayyip Erdogan would be to break the decades-old taboo and invoke the G-word himself, says Bobby Ghosh, a columnist and member of the Bloomberg Opinion editorial board.

Erdogan will arrive at the White House on Wednesday, November 13, still smarting from U.S. House of Representatives’ recent overwhelming vote to recognize the Armenian Genocide of 1915. He has called it “the biggest insult to our people,” and apparently even considered canceling his trip to Washington in protest.

"This is consistent with the vituperative response of Turkish leaders to previous instances when this dark chapter of their nation’s history has been invoked by foreign governments or parliaments. Their reflexive outrage is both wrongheaded and self-defeating. Congress could hardly have expected the Genocide resolution to deliver more than a rap on Erdogan’s knuckles. His overreaction gives the impression they landed a haymaker," Ghosh says in the piece.

"Granted, Erdogan was probably right to see the vote as less about moral clarity and more as an attempt by Congress to punish Turkey for policies hostile to American interests — most recently, the military offensive against U.S. allies in northeastern Syria. The House duly followed the Genocide vote by calling on President Donald Trump to impose sanctions for the invasion."

This wasn’t the first such gesture by Congress: In 1975 and 1984, the House formally recognized the slaughter of Armenians by Ottoman forces as genocide. Every U.S. state barring Mississippi has done likewise. Beyond the U.S., the genocide has been officially recognized by more than 30 countries, including France, Germany and even the country Erdogan seems to regard as Turkey’s new best friend, Russia.

"Paying no attention to one more Genocide resolution would have made more sense than expressing outrage over it. But the boldest and wisest course would be f...

‘US and Israel should recognize Armenian Genocide’ – Bloomberg

Israeli journalist: US and Israel should recognize Armenian Genocide

Senate should recognize the Armenian Genocide now - US Senators

Israel should have recognized Armenian Genocide long ago: Yesh Atid party is going to submit new bill to parliament