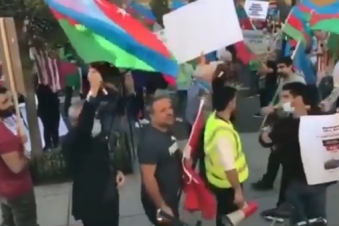 PanARMENIAN.Net - A group of Azeris rallied in Washington, DC, playing loud music clearly calling for "jihad" and using the Grey Wolves sign, the Turkish equivalent of the Nazi salute, according to a video posted on Instagram.

The Grey Wolves is a Turkish far-right organization and movement affiliated with the Nationalist Movement Party (MHP). Their members adhere to an extreme form of Turkish nationalism. It has been characterized as neo-fascist by scholars, mainstream media, and left-wing sources. A 1981 article in the New York Times described MHP and its satellite groups as a "xenophobic, fanatically nationalist, neofascist network steeped in violenc...