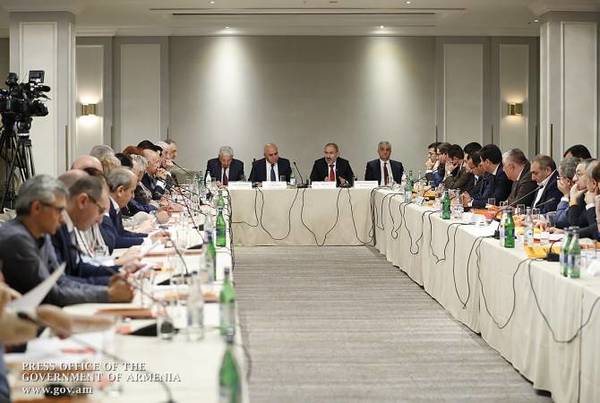 Prime Minister of Armenia Nikol Pashinyan participated in scientific-practical conference ''What to do? Economic revolution - understanding and implementation'' on October 9. During the conference the homonymous book was presented, where the results of scientific studies and ideas of the leading economists of Armenia are presented.

As ARMENPRESS was informed from the Office of the Prime Minister of Armenia, Pashinyan delivered opening remarks. ''It's important to record the fact that in the recent period it's becoming a more wide-spread idea that psychology and people's moods become more important factors for economy. In the modern world a greater emphasis is put on the factors that public mood, public expectations have greater economic significance than mere numbers and combinations of numbers. These discussions are first of all important for us in terms of those moods'', PM Pashinyan said, reaffirming his understanding that individual effort and individual's approach and perception are the basis of Armenia's development. ''Cooperation, dialogue are the key factors that shape the psychology and mood that have a great impact on economy. I think that the economic situation of 2019 and economic indexes prove the thesis'', Pashinyan said, noting that a very good mood for economic activities has been created in Armenia.

A number of reports were presented and referring to the steps aimed at the fight against shadow economy, PM Pashinyan made some observations. ''Here we have both good and bad news. In the context of cutting shadow economy the IMF said in one of its recent reports that if Armenia records 0.3% rise in the ratio of tax-GDP it will be a great success for Armenia. By the predictions for this year and by the current data we have improved tax-GDP ratio by 1.2%, which is a 4-fold better result than the best recommendation of the IMF’', Pashinyan said, adding that the bad news is about the component of behavior. ''In the sidelines of the festive events held in Gyumri dedicated to the Independence day 15 thousand people visited Gyumri. There were no vacant places in restaurants and cafes, which means that a great economic activation took place in the city. I inquired about the trade volumes in the city on September 21 and I found out something unexpected for me. The number of the bills printed by check-tills were the same ...

PM meets with Armenia-accredited ambassadors, shares the results and challenges of the past year