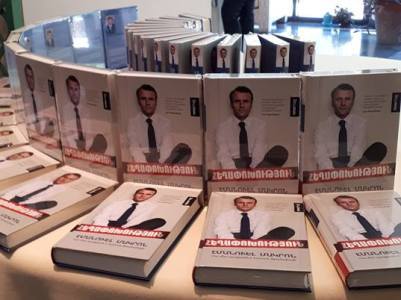 YEREVAN. – Presentation of the Armenian translation of the French President Emmanuel Macron’s book titled “Revolution” took place at the French Embassy in Yerevan on Wednesday.

“Translation of a politician’s book is uncommon, as a rule, such works are for internal use. But the Armenian edition says a lot about relations between the two countries,” Jonathan Lacote told reporters.

According to French tradition, the authorship is an indication of the credibility of the politician’s authority, he said adding that Macron’s book is devoted to his election campaign and reflects events in France.

“The revolution in France before the elections marks another parallel with Armenia,” th...

Presentation of book “Perspectives of Co-Existence of the EU and EAEU Integration Processes: The Case of Armenia” held in Yerevan

‘For those who fell with the sun in their eyes, who just wanted to live’ – Macron signs Armenian Genocide memorial guestbook