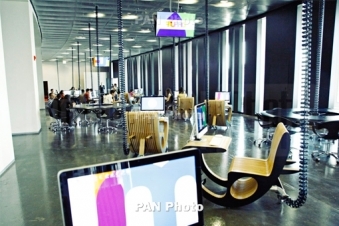 PanARMENIAN.Net - Armenia, a country facing major issues such as border security and the post-Covid situation, is looking at information technology to turn its stagnant economy around.

During Soviet times, a lot of the computer programming for weapons used to get done here.

"Obviously, Soviet technology was always behind the West. If Soviet Armenia had been an independent country, it would have been among the top 15 or 20 in the world when it came to IT,” political consultant Eric Hacopian said said, according to the Washington Diplomat.

Hacopian noted that ServiceTitan, a US-Armenian business software “unicorn,” plans an IPO next year. Its valuation is already at $10.5 billion; Armenia’s total GDP is around $13 billion.

“If these guys go public and their stock rises by 20%, they’ll be worth more than the GDP of this country,” he said, adding that “at least two more unicorns are coming, and one of them, Seda Systems, is the number-one Google subcontractor for cloud systems.”

Hovhannes Toroyan is chief strategy and analytics at AmeriaBank, which has a 22% market share and assets of $1.8 billion, making it Armenia’s largest financial institution.

“For sure, nobody knows what’s going happen,” said Toroyan, predicting that anti-Kremlin sanctions will be severe and long-lasting.

“Russia is our major trading partner, and frankly speaking, it’s never very positive when your biggest trade partner is having difficulties,” he said. “On the other hand, we already see lots of opportunities opening up. The Ministry of Economy says already more than a dozen Russian IT have registered in Armenia. They’re moving away from Russia.”

Armen Kherlopian, a trained biophysicist and professor at the American University of Armenia, is enthusiastic and optimistic about the future.

An ethnic Armenian who grew up in upstate New York, Kherlopian is a founding partner of BAJ Accelerator, which is hosted at the Jacobs-Technion Cornell Institute. He also sits on the advisory board of NASA-backed Translational Research Institute for Space Health (TRISH), a Houston-based collaboration involving the Baylor College of Medicine, CalTech and MIT.

“Armenia’s economy is only $12 billion, so a single startup unicorn represents $1 billion in value. For a country like ours, this is a viable economic strategy,” said Kherlopian, interviewed over an Ararat apricot brandy at Yerevan’s trendy Compot...

India is much more than Bollywood, elephants, tea and yoga: Ambassador Dewal’s exclusive interview to ARMENPRESS