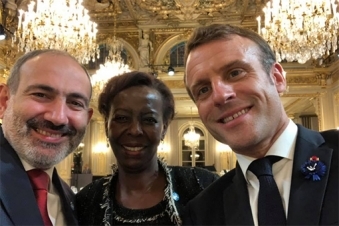 Pashinyan arrived in the Champs Élysées, where he attended an official reception hosted on behalf of French President Emmanuel Macron in honor of the heads of state and government participating in the Second Paris Peace Forum. The Prime Minister of the Republic of Armenia was met by Emmanuel Macron at the Champs Elysees.

On November 12, the Armenian Premier will attend the opening of the Second Paris Peace Forum and a thematic discussion, at which he will deliver a speech. Prime Minister Pashinyan will present a symbolic gift to the Librar...