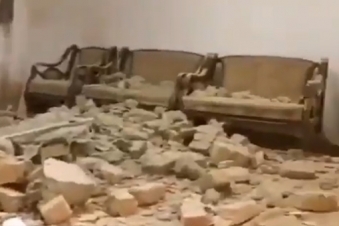 PanARMENIAN.Net - Footage showing the aftermath of stray fire from Azerbaijan damaging a house in Iran has landed online.

The Iranian authorities have announced that dozens of rockets have fallen inside the Islamic Republic since the beginning of hostilities, injuring two people. At least two Israeli-made drones belonging to the Azerbaijani army have al...