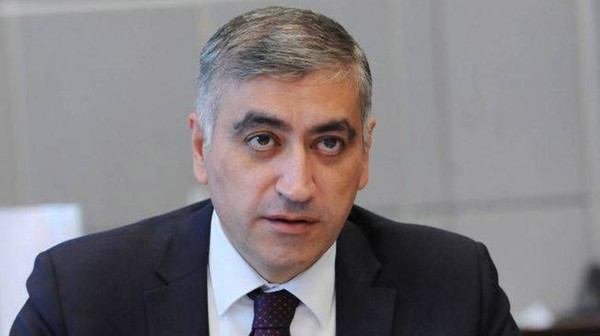 Armenia’s Permanent Representative to the OSCE Armen Papikyan delivered a statement on "The aggression of Azerbaijan against Artsakh and Armenia with the direct involvement of Turkey and foreign terrorist fighters" at the 1326th meeting of the Permanent Council on Thursday.

The Armenian diplomat informed about the Azerbaijani attacks on the Armenian defense positons in the Gegharkunik border section on 28 and 29 July, killing three Armenian servicemen and injuring four others.

“The Armenian delegation has repeatedly expressed concern over the lack of an adequate and robust international response to the aggressive actions of Azerbaijan and the belligerent statements of its leadership. We believe and would like to reiterate once again that the lack of an adequate response by the international community to the use of force against Artsakh and the flagrant violations of international humanitarian law and the Helsinki Final Act principles, mass atrocities perpetrated against the people of Artsakh, including ethnic cleansing, encouraged Azerbaijan to make the use of force as the main instrument of its foreign policy, thereby threatening regional peace and security,” Papikyan said.

“These flagrant violations of the trilateral ceasefire statement of 9 November 2020, are a logical continuation of the aggressive posturing and bellicose rhetoric of the president of Azerbaijan. The Azerbaijani leadership does not shy away from openly stating its claims to the territory of the Republic of Armenia. In a recent interview, the president of Azerbaijan, while admitting that the Azerbaijani military units are located in the territory of Armenia, reiterated Azerbaijan’s nonsensical and spurious territorial claims against the Republic of Armenia, stating, in particular, that “Zangezur” was the land of their ancestors. A claim that could be easily refuted by anyone with basic knowledge of history. Though, one should acknowledge that there is a peculiar version of history invented and taught in Azerbaijan,” the diplomat said.

Papikyan recalled that the Armenian Foreign Ministry strongly condemned the military provocation of Azerbaijan, which further undermined regional peace and security, and stressed that the military-political leader...

PM addresses nation, says Armenia will fight to the last