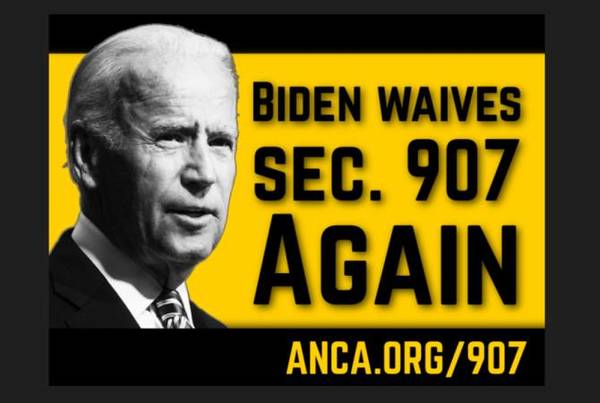 Despite ongoing Azerbaijani aggression against Armenia and Artsakh, President Joe Biden has, yet again, waived Section 907 restrictions on U.S. aid to Azerbaijan, clearing the way for continued U.S. assistance to the corrupt, anti-Armenian Aliyev regime, reported the Armenian National Committee of America (ANCA).

During his run for office, on October 14th, 2020, then-candidate Biden stated that the United States must “fully implement and not waive requirements under Section 907 of the Freedom Support Act to stop the flow of military equipment to Azerbaijan.” As President, he first reversed his position on the issue on April 23, 2021 – on the eve of his historic announcement properly recognizing the Armenian Genocide. “American recognition of the Armenian Genocide comes with responsibilities, among them not arming or abetting Azerbaijan’s drive to complete this crime,” commented ANCA Executive Director Aram Hamparian at the time. “Any action by President Biden that green-lights U.S. aid to t...

Biden waives Section 907 restrictions on US military aid to Azerbaijan

ANCA disappointed over Biden waiver of congressional sanctions on Azerbaijan

ANCA disappointed over Biden waiver of congressional sanctions on Azerbaijan

ANCA requests meeting with Biden regarding enforcement of Section 907

Blinken: U.S. has to "continue to take a look at" military aid to Azerbaijan