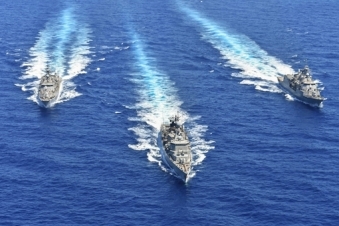 PanARMENIAN.Net - Greece's navy has issued a code orange alert, advising battleships to surround a cluster of tiny islands in the southeast Aegean Sea and prepare for potential hostile action from Turkey, the Voice of America reports.

Greece’s defense ministry on Wednesday, October 21 released pictures of what Greek officials called a “protective wall,” illustrating what it called the severity of the looming standoff with Turkey.

Military officials say Greek gunboats circled the Kastellorizo and a number of uninhabited islands, in a move they said is meant to shield Greek territory against Turkish attempts to survey disputed waters for oil and gas.