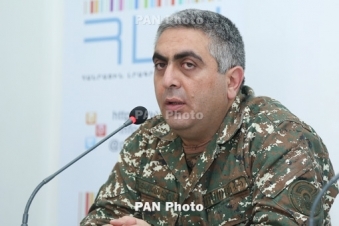 PanARMENIAN.Net - Almost all of Azerbaijan's subversive groups have been destroyed after infiltrating Nagorno-Karabakh (Artsakh) villages, according to Armenian Defense Ministry representative Artsrun Hovhannisyan.

Hovhannisyan said Friday, October 23 that the settlement of Shekher in the south of the front has been cleared of Azerbaijani elements, but work is underway in some other parts.

The Azerbaijani forces continued the hostilities in the frontline on Friday, also bombarding civilian settlements, including the capital Stepanakert, the towns of Martuni and Martakert, Berdzor and adjacent villages.

The Azerbaijani troops made several attempts to attack in the direction of Vorotan river but were thrown back, and were forced to flee when their armou...

Karabakh thwarts 3 Azeri attempts to assault within an hour

Karabakh army thwart, stops attacks in every sector of the front

Artsakh: 2019 saw the least number of ceasefire violations since 2010