Armenia urges Azerbaijan to refrain from provocative rhetoric and actions

Armenia urges Azerbaijan to refrain from provocative rhetoric and actions 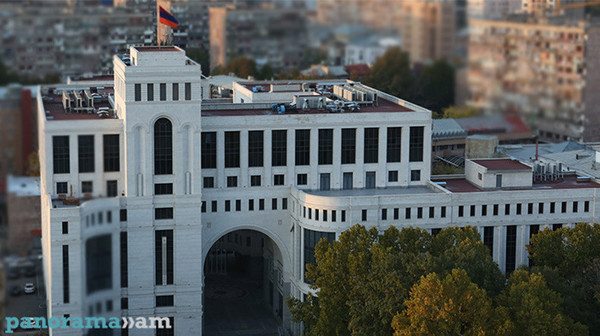 Armenia urges Azerbaijan to refrain from provocative rhetoric and actions, the Armenian Foreign Ministry said in a statement on Tuesday, responding to Ilham Aliyev’s latest statements. The full text of the statement is provided below.

"According to Azerbaijani media outlets, during the meeting with residents of the village of Gonagkand in the Guba region օn December 6, 2021, President of Azerbaijan Ilham Aliyev demanded that Armenia should accept the terms of Azerbaijan and announce a specific date for the opening of the so-called "Zangezur corridor". The President of Azerbaijan also accused Armenia of demonstrating tortuous approaches regarding the issue of opening the roads and communications.

Regarding the above-mentioned statements the Foreign Ministry of Armenia underlines the following;

4. The 3rd provision of the Statement of January 11, 2021, stipulates that for the implementation of the main activities, Co-Chairs of the working group will approve the list of expert subgroups of those fields, which will include representatives of the relevant authorities of the Parties and officials of the organizations.

6. During the first meeting on January 30 2021, the tripartite working group decided to form two expert subgroups, one for the issues of the automobile, railroad, combined transportation, and the other one for the insurance of transportation, including security, border, customs, sanitation, livestock and phytosanitary, as well as other issues.

8. On November 5, 2021, the Deputy Prime Minister of the Russian Federation, the Co-Chair of the Tripartite working group Alexei Overchuk stated during the meeting with the Prime Minister of Armenia Nikol Pashinyan that the search for solutions within the tripartite working group is based on the following principles: the sovereignty of the countries through which the roads will pass will be maintained and that the types of control at t...

EU urges Armenia, Azerbaijan to refrain from further movements and actions by the armed forces

We condemn in the strongest terms the ceasefire violations by the Azerbaijan'i armed forces in the direction of the Tavush region:Armenian MFA